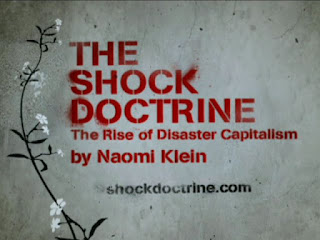 Years ago I borrowed a book from my local library called ‘The Shock Doctrine’ by Naomi Klein.
It scared the bejazus out of me.
Last year I decided I needed my own copy, so got one, but it’s taken me till now to pluck up the courage to read it again. I’m only half way through the first chapter and already I’m fighting the urge to curl up foetally under the bed.
This time I’m reading it after reading Paul Mason’s ‘Post-Capitalism’.
But, where Mason ends on an optimistic note, looking at the possibilities in moving beyond capitalism to the time when almost everything can be produced with hardly any work, using technology already in existence, I am looking at a world where the real powers, the super-rich owners of multi-national corporations, have already seen this future and have begun to seize control of assets that so far have always been free – such as water – in order to consolidate their power over the population of the whole Earth.
Let that sink in.
It’s never been about money.
Money is only a means to an end – and the end is power.
Paul Mason, these guys get it! They probably got it before you wrote ‘Post Capitalism’. They are preparing for the post-capitalist world while we are still dazed and bewildered at the crumbling of capitalism around us.

This is what ‘The Shock Doctrine’ is about. It describes the conscious policy of exploiting every single natural or man-made disaster, to make a clean sweep of whatever social institutions or property rights were in place, so that every single thing can be replaced by a for-profit business that dispossesses the mass population while corporations move in and take over.
So - a hurricane destroys New Orleans? Bulldoze all their state schools and replace them with privately-run charter schools. A tsunami hits Sri Lanka? Bulldoze hundreds of fishing villages and replace with high-rise hotels for tourists.  Terrorists destroy the World Trade building? Use it as an excuse to invade Iraq, a country that had nothing to do with the attack, and destroy very hospital, school and police force in the country, prioritize that over military targets, then offer to replace them with for-profit-run businesses owned by US companies.  Not to mention the vast fortunes to be made by weapons manufacturers and so-called security firms.

Shock Doctrine was written before the banking crash in 2009. But there again was a perfect example of how to take advantage of a crisis that swept away peoples’ livelihoods just as completely as the tsunami and left people too bewildered to plan for their futures.

Enter austerity.
The exact same economic plan that had already been imposed on countries in South America, many parts of Africa and the Far East, destroying their democracies and economies, and reducing people to frightened and obedient chattels.

In the US we see a booming business in privately owned prisons, where the black population is incarcerated and made to work for nothing, producing commodities that used to be made in factories by ordinary folk who had jobs. The re-enslavement of the black population.

It’s a little harder in the UK. It’s mainly the white working class who have lost out, so a little finesse is required.  Zero hours contracts, the gig economy, split the working classes along race and geography, feed them childish stories about immigrants taking their jobs, when it’s the corporations that have taken them. All in the name of the free market ideology.

Make no mistake - this free marketism will be enforced by violence where they can get away with it. Any kind of organised resistance – Trades Unions, legislatures, and laws like the Human Rights Act, the European Union, the democratic voting system, the free Press – whatever - will be destroyed.
It might not be the systematic violence of Pinochet’s Chile but the aim is the same. To make us all too frightened to resist. We see it here in the draconian changes to our welfare system.

All of these measures actually destroy the economy. Capitalism doesn’t really work when too many people, globally, are too poor to be able to afford to buy any of the so-cheaply manufactured goods using slave labour. The system relies on enough people having enough money to keep it going.
But that doesn’t matter.
It’s not money that matters, it’s power.
Those who are running this show will be quite happy with some kind of technologically-based feudalism – as long as they are on top.
Which is where they are making sure they will be.
Destroying capitalism would just be the final coup, after which they’d be able to take off the gloves and come out from behind the screens from where they’ve been pulling the strings of their puppet governments all this time., and show who’s really boss.
And we’d probably hail them as our saviours for doing it – just as so many already are with Trump in the US.
This whole scenario relies on producing enough shocks to the system to keep the population afraid and unable to rally any kind of resistance.

There’s been a slight glitch to this scheme though, just lately.
The shock got delivered to the wrong people.
The government that was meant to deliver austerity and keep the people under control, is now the one that’s in a state of shock. They didn’t know Brexit was part of the plan.  So Cameron and Osborne collapsed, the rest of the crew, Gove, Boris etc, have been shown for the ineffectual clowns they always were.
Our PM is still trying to stick to the script by foisting grammar schools on an unconvinced country, and they are handling the NHS takeover so badly that most people actually support the striking junior doctors.

And the biggest shock of all?
The obedient, endemically corrupt tool of big Business – The British Labour Party – has actually elected a leader who actually has a plan.
A different plan.
In the middle of the panic and disarray, Corbyn is there calmly, quietly talking about taking back the country’s infrastructure into public ownership.
Of all things!
That idea was supposed to have been well-and-truly discredited decades ago.

But don’t worry.  The LP has always obediently stepped up when its masters snap their fingers. So there they are, doing everything they can think of to get rid of that irritating nuisance who just won’t play the game.

Corbyn’s opponents will not be stopped easily. He can’t be got out of the picture as easily as the Democrats got rid of Bernie Sanders. They will still keep hammering away.

And we must not let them.
The Labour Party is OUR party.
It grew out of a labour movement that our ancestors fought and bled for.
We are not consumers, to flounce off and find another party that suits our tastes better. We have to stay and fight to return ownership of what is ours, however long it takes.

So- Heave ho! My hearties! Courage!


That picture of feudalism with technology is not just drama. It’s the reality that faces us if we let the bastards win. This isn’t about ourselves.  It’s about whether our grandchildren are going to grow up free, or as serfs.