3rd September: what happened to the golden light? And: would you put your mother on one of these?

I went to see a friend and wise teacher, who is also a chiropractor (in the generic sense of hands-on manipulation of muscles and bones to help injury or pain.) I've been going to her for a couple of years because she helps with aches and pains caused by lifting Mother, and also with older, deeper emotional injuries that have been held in the body through life.  So she’s a part of my journey of discovery of my mother in me.
I told her about this golden light thing that I am experiencing around Mum just now. Her take on it was that as Mum is approaching death, she is entering into an in-between place. Whatever death is.  She is becoming more and more transparent, and as I am living close to her, I too am being drawn into this transitional, transparent place of openness. I don’t think you have to believe in an afterlife, or Spirit, or anything like that for this to happen.  I don’t know what death is, but knowing one is approaching it has to be the ultimate assay of life.  It’s a place of shedding all that is inessential down to a photon layer of self, as that self comes closer and closer to a point of not-being.
In her own way, Mum is working away there, though she is not a deeply reflective person. She dozes on her chair, mouth open, wakes and switches on the telly, listens to her music, eats her food, toddles about the room when she feels strong, breathes eggcup-full sized breaths. But underneath, I know, from the occasional comment or story, that the sifting is taking place. Drawing closer. Shedding whatever needs to go.
And I’m in there with her, though I’m still full of life and future, this side of the veil.

My practitioner tells me a story of the night her own mother died: how she phoned her and her mother said her long-dead husband was there with her and it was so exciting because she was moving house. Her mother had been utterly prosaic and unspiritual all her life, and sounded quite bonkers talking like this. But that night she died.
I was reminded of how I sensed my grandfather around me, who I had not thought of for years, one weekend when I drove over from Wales to spend a weekend with my parents. Dad had some health problems, but nothing major, and on the visit he was just the same old infuriating Dad. Except there was something oddly different about him, something transparent, that puzzled me. One week later he died suddenly.
Of course, it would be me that picked up on that.  My grandfather came to me the moment he died, when I was still at boarding school. And there he was, coming again to me when my father – his son – died.
I drove home after the treatment, my practitioner’s words about her mother snagging me. Suddenly I feel Dad there, strongly present in the car with me.  I am spooked. I realize I’ve forgotten my mobile phone. Anything could have happened while I’ve been out.  It’s almost an hour and a half’s drive home.
When I arrive all is well. The new carer coped alright.
The humid house-smells wrap around me as I go in. Normality resumes.

After all that I was surprisingly crabby with Mum, getting irritated over petty things during the evening. At bed-time I thought “I don’t want to be snappy with her. I’d hate it if the last thing I said to her was an angry reaction to something trivial.” I resolved to watch for this too, and try to remain in the golden light.

The following day a kind of turntable thing arrived that I have ordered.  It’s a pivot transfer. The ‘patient’ stands on it then you turn them in the direction they need to go. Mum’s left leg seems to have seized up completely lately and she’s finding it hard to make that sideways turn to get from one seat to another – bed to wheelchair, chair to commode etc. Last week her legs got all tangled up with each other and she fell – not on the floor, she caught herself and went face down on her chair. I had to lift her and set her to rights on the chair. Hence my need to see the chiropractor. I’m worried about coping with this long-term. And also not all the carers are able to get Mum up to stand on days when she’s weak.
So I researched various kinds of lifting, and transfer aids and found these things. There seem to be lots of different makes of them so I assumed they must be useful, so I decided to give one a try. It was only just under £20. I hadn’t been able to find any films on YouTube of how exactly they are used, and they give few details on the websites where you can buy them.
Well, call me stupid, but I assumed there’d be some kind of catch on it, so you could lock it while the patient gets on or off it. But no, there was nothing like that, so it swivelled as soon as you put a foot on it. 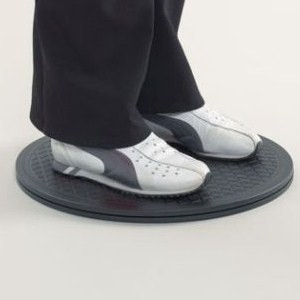 I knew Mum was nervous at the thought of standing on anything like this, so I tried it myself, holding onto the back of a chair to simulate her walking frame.  It was clearly took a bit of a knack, but I thought it would be alright once she’d got used to it.  So I persuaded her to try it, and she put one foot on it while still sitting, felt how it swivelled and refused to go any further. Of course she couldn’t use it. It was quite unsuitable for anyone with even the slightest problem with balance. In other words, anyone who was so wobbly they’d need one of them could not possibly use one. But I became inexplicably angry with her for not trying harder. Quite unfair and my internal witness was saying “WTF?” but I couldn’t stop myself. I stormed out and slammed the door as hard as I could – something I used to do as a child.

I get that it was because I was anxious about being able to cope on my own as Mum gets weaker and weaker. But I was completely out of order. Even when I’d calmed down and acknowledged this, I still couldn’t bring myself to apologize. I was afraid Mum would take the apology with bad grace. So I sent the rest of the day being really nice, but acting as if nothing had happened. But feeling shaken and upset with myself.
What idiot designed that thing? How does anyone get any use out of them?

And what happened to the golden light? Was this reaction some kind of internal bullshit-detector restoring me homeostatically to mundane normality?

I decide to keep the turntable and use it if and when I ever do start doing sculpture. I’ll still need to clamp it to stop it rotating while I’m hacking away.

As for helping Mum move that leg – I have perfected a method of bending down and just lightly pushing it forward, while I hold her upright against my hip.