Caring for my Mother: It’s as if Mum is in a golden, end-of-summer light.

31st July 2016
There’s a different feeling now. Something in Mum, or in me. I can’t say.
Somehow I’m able to be more present to Mum. Not really anything different in my manner – I’m still lost in a daydream most of the time. But the longing to be out of this has calmed.  I’ve made all my plans for the future, laid them well, and now I’m in a state of suspension, waiting for it all to happen. And I’ve written before of how the desperation to get on with the next part of my life has been physically unbearable at times.  But not now. 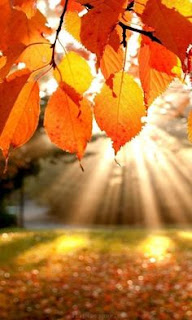 I’ve had a little holiday break away in Glastonbury for a week. I spent time with friends, or being quiet and just resting, I met an interesting philosopher and quite uncharacteristically for me, struck a conversation with her. So, yes, I’m rested and refreshed for the continuation of my duties towards Mum. That helps.
And I now have my camper van to sit in – I’m there now, smelling the summer scent of the pine tree a few feet away, enjoying the warmth and sunlight and sounds of nature. No traffic just now, as it’s Sunday, so no smells of petrol wafting in.  All of this makes a difference and keeps me cheerful with Mum.

But there’s something else. It’s as if Mum is in a golden, end-of-summer light. It reminds me of that moment of stillness one feels at autumn equinox – that pause and breath at the point of balance, the final enjoyment of the summer richness as the leaves begin to turn golden and release their sweet, musky scent as they drop.  I see this around her, but there’s nothing different in her manner.
She says ‘Thank you’ for whatever I do for her a bit more than before. But she still lies in her chair listening to music or watching telly.  She’s wasting away now – literally. The muscles are disappearing as they are now being burned up to replace the energy she needs to keep breathing.
Her stomach is too crushed to allow much food in so she can’t eat enough to replace the energy she uses. And breathing is a lot of effort now.
I gently rub her calves to get some circulation in there before she pushes up to stand and I’m shocked at how they’ve shrunk. One of the community nurses who came round to do her warfarin test the other day had not seen Mum for over a year, and she was struck by how much thinner Mum was. She measured her arm and compared it to what it was last time she came.  She said Mum had lost 2 cms from her upper arm.  I was shocked at how much that was, but I can see her getting thinner by the day. We’re going to have a visit from a community matron to see what else they can do for her. And we’ve been provided with a better cushion for her to sit on to prevent bedsores – apparently they no longer recommend fleeces. They want to give Mum those special drinks that are a food supplement, but it remains to be seen if Mum likes them. It’s hard to get her to drink, but anything will help.

But it’s more than this.  Even my longing and impatience have receded, and I too float in quiet suspension, just accepting whatever this stage of the journey is.

The other day I was getting Mum up from bed, helping her dress, and she asked me “How long do you think this goes on for? This….” and she gestured at herself.  I thought “I can’t just come up with some platitude, jollying her along, I have to be true to her.”  So I said “I can’t imagine what it must be like to be so dependent and unable to do anything for yourself.  I don’t think I could bear it as well as you are.” She replied, “Well, I’m worried about how it all is for you.” Again I strove for integrity, not to dismiss her feelings. All I could say was “Well, neither of us has ever done this journey before. We’re both having to work it out as we go along. It’s not like there’s an instruction manual. And we just have to find ways to deal with our feelings, as well as the practicalities.”

It’s true that I’ve become worried about being able to cope physically with Mum’s increasing weakness. I’m afraid I’ll pull my back so badly I won’t be able to keep helping her. I had discussed whether she might, after all, need to go into a care home.  We talked about it a bit with my brother when he and his wife came to look after Mum while I had my break.  But after thinking it through very carefully, I feel this would not be right for me.  To be honest, as things are now, I co-exist with Mum in the house.  Yes, I’m always on call, except when we have carers in, but apart from that, I just do my own thing.  I don’t often sit with her, I’m off in my own rooms or in the garden or in my van.  If she was in a home I’d find it unbearable that she would feel abandoned by me.  I’d have to go there every day to see her.  Even if she was in the same village as me, that would take out a large chunk of every day for me.  If I had to drive 30 minutes or so to get there then it would be pretty well half a day every afternoon.  And, once there, we wouldn’t have a thing to say to each other. I’d have to do what I’ve done when Mum has been in hospital, which is read to her.  And how would she play her super-loud music in a home where there’s other people to be disturbed by it?  My brother was quite favourable to her going to a home. He said “Once she was in one, she wouldn’t last long.”  Dear bro! He didn’t mean it as brutally as it sounds, just that tactfulness is something that’s always totally eluded him.

No, it won’t do. From my own purely selfish point of view, it wouldn’t do.  Let alone Mum’s needs and feelings.

So, I’ll carry on here, with no idea what the near future will bring, grateful for whatever help I get.

And I’m looking for someone in my local area who I can go to for back treatments. Which means I will have to endure a lot of well-meant, but inappropriate, suggestions about little exercises I can get Mum to do, and how I can improve my lifting technique in ways that have no relevance to the conditions in which I actually have to lift Mum.

And I find I’m much kinder to Mum these days – I mean, more actively kind in how I speak to her, rather than being a bit withdrawn and depressed. I actively engage with her a bit more, use humour. Not jollying her along, just being more present with her in this place of acceptance where we both are now.